Pollock is a species of fish from the cod family. Body length – up to 1.2m (on the average – 80-90 cm), can live up to 30 years; Dorsal fins – 3, anal – 2, The colour of the upper part is brownish and a silvery-white colour on the belly. In adult fish the lower jaw protrudes forward. Chinstrap is very short. In addition, the fish is easy to distinguish from other fish due to the presence of a slightly curved strip of light colour, which is clearly visible along the dorsal line from the side. Pollock is a predatory fish. Young individuals feed mainly on fish caviar, as well as small crustaceans and as they get older they begin to hunt more for small fish .The period of spawning can last from January to July. Pollock spawn at temperatures up to ten degrees above soft ground. One female is able to spawn from five to eight million small eggs. Cousin to the Cod, its white meat, delicate texture and mild taste make it one of the most versatile and healthy choices available. Pollock meat contains a huge amount of healthy substances – vitamins, as well as micro- and macro elements. The fish is rich in vitamin B12, selenium and useful proteins. The liver and fat of the fish also have very valuable properties. Significant benefit of meat, for pregnant women, nursing mothers, as well as young children. Phosphorus, contained in the meat, has a beneficial effect on the musculous skeletal system, and iodine is an essential component for the normal functioning of the thyroid gland. All in all the Pollock is a very underrated fish.

Pollock can be captured on a variety of tackle. Usually on a 20-30lb rod with 30lb line using cod feathers. Jelly worms can also be very effective when used on a single hook or threaded over regular cod feathers. Pollock are usually on the bottom or close to the bottom. When pollock take the lure you don’t need to strike the fish as it will hook itself and dive for the bottom. In deeper water, take your time getting the fish to the boat especially if you intend to release the fish. If you like lure fishing, light rods will get the most from pollock. A specimen pollack is 12lb, not an easy fish to capture, but in many areas, Clare especially, double figure pollock are caught on a regular basis. Pollock are our most plentiful species in our inshore waters. The best spots to catch pollock are reefs and rocky ground. Pollock like to feed mainly around reefs. It is possible to catch plenty of pollock on feathers on their own, or baited with strips of mackerel. For more fun and better sport use one bait on a single hook, Shads, jelly worms and jigs, can be great sport. Using light gear and jig-heads is great fun and using light gear often accounts for bigger fish. 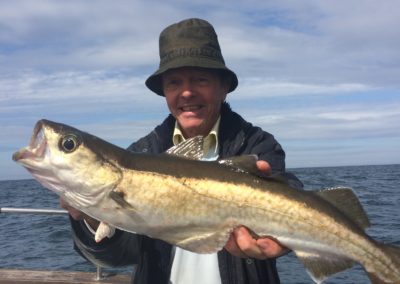 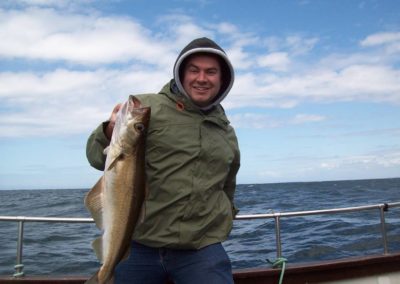 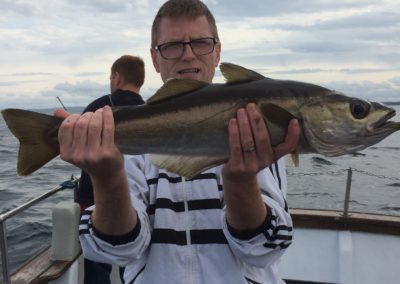 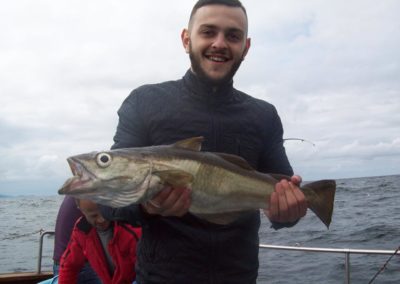 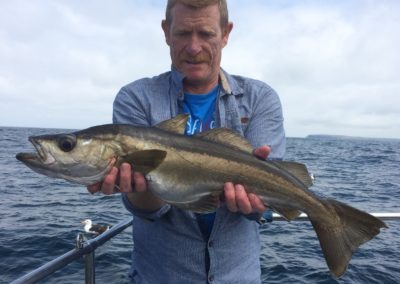 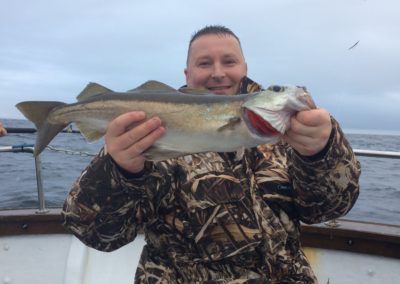 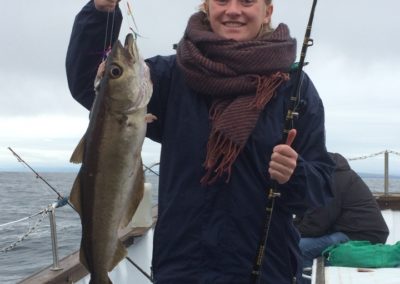 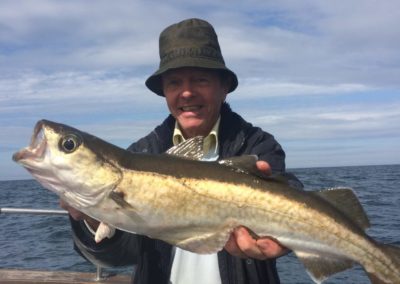