The Blue Shark is a species of shark that inhabits deep waters in the world’s oceans. Preferring cooler waters, blue sharks migrate long distances, such as the North Atlantic in summertime. Although generally slow moving they can move very quickly. Blue sharks can give birth to large litters of 25 to over 100 pups. They feed primarily on small fish and squid, although they can take larger prey. Maximum lifespan is still unknown, but it is believed that they can live up to 20 years.

Fishing Adventures is part of the Marine Sportfish Tagging Programme so all our sharks are documented,  tagged,  and released unharmed.

How To Catch Blue Shark

We fish for Blue Shark using a 30lb class rod and Penn 4/0 or similar reel and a fairly large hook with a wire trace, as the shark’s rough skin will snap regular fishing line. We tend to use 50llb breaking strain fishing line, and shock leader if using braid. This is a guideline as some of our shark fishers are using lighter or heavier tackle depending on personal preference.

A whole mackerel on the hook is the order of the day, and some prefer to remove the backbone and create a flapper, and using a float or balloon we drop the bait to the preferred depth. We also use special bait (chum) to attract the sharks 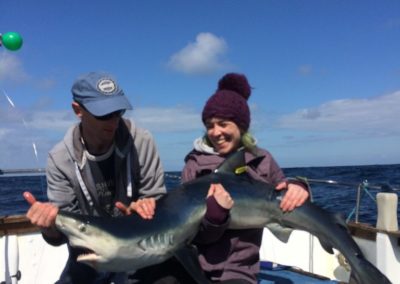 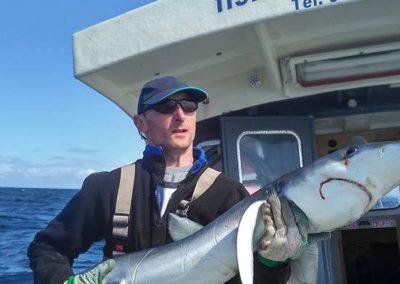 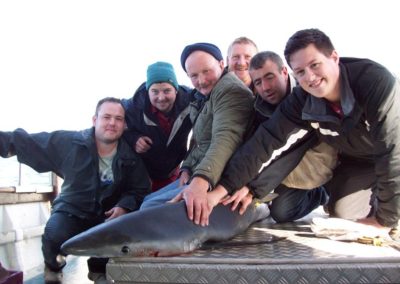 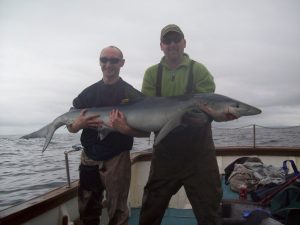